What's happening with real estate Facebook ads? Are they fading away, or is there still plenty of opportunities left for agents?

Will it come to an end? I believe it will yes…

However, I don’t think Facebook will ever fade away.

It will always be a useful platform for real estate agents.

The potential there outside of ads will always be incredibly useful.

Let’s Get into it!

There Are Two Parts To This Equation

Is establishing your own short term lead strategy on Facebook.

I want you to GET WHILE THE GETTING IS GOOD!

Lately, I’ve had a number of comments and emails coming my way saying

Now, if that’s the perspective you have and you’re going to stand your ground on that

You should stop reading this blog now because I wholeheartedly disagree with you.

just because one strategy worked for one agent in a DIFFERENT MARKET,

doesn’t necessarily mean it will work the exact same for you.

There are a number of variables that go into the Facebook ad space.

You should always be experimenting with the fine-tuned details to make it work best for you.

Things always work better for some agents in certain markets.

All the case studies we provide are meant to give you a starting point.

What Are Those Starting Points?

These are performing well statistically across the board.

The concept of precomposed searches being effective isn’t new either.

your prospect has to spend filtering through various properties. Now, if the single story home search ad didn’t work for you

it means the climate and interest points of your market are probably different.

So try a different type of search….

is there a large number of people relocating to your area because of a big employer?

Is there a larger population of people looking to retire and downsize?

Effective Facebook ads really come down to how well you know your market and much you’ve experimented.

Here’s an agent who picked up both the buyer and the seller.

Not sure how to go about getting your own Drone footage for Facebook?

Check out Droners.io it’s a really cool site where pilots get matched with agents.

I understand why agents are hesitant to deal with foreclosures.

However, this can lead to a recurring relationship with investors.

It’s also a large general interest point among buyers, and a good way to grow your CRM. This ad landed this agent 100+ leads that’s a huge bump to her database!

Which brings me to another very important point.

You’re being sidetracked by the short-term

There are a lot of agents who don’t want to put in the time and effort to convert Facebook leads.

You’ll be sorely disappointed. On Facebook, there are prospects at every possible stage of the real estate process.

So you need a diverse approach in terms of both the content you’re creating and the angles you’re leveraging.

If any of you have attended my Office Hours presentations every Friday you’ve heard me ask you this question.

If you can’t answer it more than likely your ad won’t perform well.

Let me give you a fantastic real estate Facebook ad example from my friend Chris with Space Coast Homes And Lifestyle.

Yes, it’s a list of single story homes but we’re using the angle of maintenance-free communities.

This is going to impact two very important things.

The relevance score of the ad, and the targeting.

Both those things will impact Chris’s costs and success.

How Can You Add More Value?

Another huge complaint I’ve seen is “I’m getting a lot of clicks but no leads”.

Now that observation is helpful but what you do about it is even more important.

Then the angle you chose to advertise is great!

The problem (in this situation) usually can be found on the landing page.

If you’re in this situation you should do two things.

Make Sure Your Messaging Is Succinct

Sticking with Chris’s example you can see below his ad and landing page use the exact same message strategy. If you want to diversify the images and phrasing I’d suggest you split test your campaign.

Meaning: Run a certain number of people to both pages and see which one converts better.

Have you Looked At Your Targeting?

Again for the sake of simplicity let’s take a look at Chris’s targeting. Now Chris is dropping pins on a map and getting really customized with his locations.

Which is very important given the location of the maintenance free homes.

According to Facebook, his audience is on the border of being too broad.

Given the population density of his area, I would say 40,000 is a comfortable projection to sit at.

Finally, don’t fall into the pitfall of being completely redundant with your messaging.

Chris sent me a screen shot of his final ad layout before launching. Make sure you’re adding diversity to the messaging of your real estate Facebook ad.

Earlier I mentioned making sure the messaging on your landing page and the ad was succinct.

Here I’m saying the text above the ad and the headline/link description below the image should be different. I’ll give you an example using one of our own ads.

You can see there’s a similarity but the headline and ad text are not verbatim.

Also, we’ve been experimenting with how adding the link in the text impacts our ad performance.

There Are Two Parts To This Equation 🤔

One of the biggest components of successful online lead generation comes down to email.

Half the equation is basically “How can I buy email addresses?”… i.e. FACEBOOK ADS. The numbers (according to emarketer.com) really back up why that’s the first part of the equation….

The other half is “How can I convert these leads to clients?”

During the golden era of Facebook ads you SHOULD BE BUYING as many emails as you can.

You’ll be left with a database of hopefully THOUSANDS of emails. Having a database like that will give you a HUGE advantage over your competition.

I’d experiment with a range of different ad sets to see which one is buying emails at the most Cost effective rate.

Then I’d double down on the ad with the lowest CPA (cost per acquisition).

I’ll leave you guys with this video that Tyler made which I think breaks this subject down really well.

So let’s revisit the question that brought you here…

If real estate Facebook ads aren’t working for you YET…

It doesn’t mean they can’t work for you, so get going while you still can.

Also, If you’re still confused on how to setup your own Facebook ad join us in Office Hours!

We’d love to get you started on a successful real estate Facebook ad campaign! 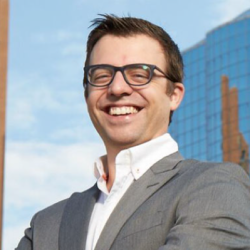 Follow Me
Tyler Zey
Hey! I'm Tyler with Easy Agent Pro! We provide top notch marketing content for realtors... And we do it for FREE! I get excited about sharing tactics and strategies that can be implemented TODAY.

Follow Me
Latest posts by Tyler Zey (see all)